ACTS OF THE APOSTLES 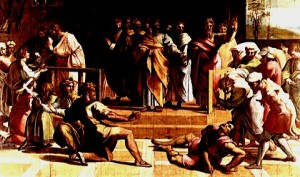 Another man named Ananias, in agreement with his wife Sapphira, likewise sold a piece of land;

with his wife’s knowledge he put aside some of the proceeds, and the rest he turned over to the apostles.

Then Peter said to him,

“Ananias, how is it that you let Satan fill your heart and why do you intend to deceive the Holy Spirit by keeping some of the proceeds of your land for yourself?

Who obliged you to sell it?

And after it was sold, could you not have kept all the money?

How could you think of such a thing? You have not deceived us but God.”

Upon hearing these words, Ananias fell down and died.

Great fear came upon all who heard of it;

the young men stood up, wrapped his body and carried it out for burial.

About three hours later Ananias’s wife came but she was not aware of what had had happened.

“Tell me whether you sold that piece of land for this price?”

“How could you two agree to put the Holy Spirit to the test?

Those who buried your husband are at the door and they will carry you out as well.”

With that, she fell dead at his feet.

The young men came in, found her dead and carried her out for burial beside her husband.

And great fear came upon the whole church and upon all who heard of it.

Many miraculous signs and wonders were done among the people through the hands of the apostles.

The believers, of one accord, used to meet in Solomon’s Porch.

None of the others dared to join them, but the people of held them in high esteem.

So an ever increasing number of men and women, believed in the Lord.

The people carried the sick into the streets and laid them on cots and on mats, so that when Peter passed by, at least his shadow might fall on some of them.

The people gathered from the towns around Jerusalem,

bringing their sick and those who were troubled by unclean spirits, and all of them were heald.

The High Priest and all his supporters, that is the party of the Sadducees, became very jealous of the apostles; so they arrested them and had them thrown into the public jail.

But an angel of the Lord opened the door of the prison during the night, brought them out, and said to them,

“Go and stand in the Temple court and tell the people the whole of this living message.”

Accordingly they entered the Temple at dawn and resumed their teaching.

When the High Priest and his supporters arrived, they called together the Sanhedrin, that is the full Council of the elders of Israel.

They sent word to the jail to have the prisoners brought in.

But when the Temple guards arrived at the jail, they did not find them inside, so they returned with the news,

Upon hearing these words, the captain of the Temple guard and the high priests were baffled, wondering where all of this would end.

Just then someone arrived with the report,

“Look, those men whom you put in prison are standing in the Temple, teaching the people.”

Then the captain went off with the guards and brought them back, but without any show of force, for fear of being stoned by the people.

So they brought them in and made them stand before the Council and the High Priest questioned them,

“We gave you strict orders not to preach such a Saviour;

but you have filled Jerusalem with your teaching and you intend charging us with the killing of this man.”

To this Peter and the apostles replied,

“Better for us to obey God rather than any human authority!

The God of our ancestors raised Jesus whom you killed by hanging him on a wooden post.

God set him at his right hand as Leader and Saviour,

to grant repentance and Forgiveness of sins to Israel.

We are witnesses to all these things,

as well as the Holy Spirit whom God has given to those who obey him.”

When the Council heard this, they became very angry and wanted to kill them.

But one of them, a Pharisee named Gamaliel, a teacher of the Law highly respected by the people, stood up in the Sanhedrin.

He ordered the men to be taken outside for a few minutes and then he spoke to the assembly.

“Fellow Israelites, consider well what you intend to do to these men.

For some time ago Theudas came forward, claiming to be somebody, and about four hundred men joined him.

But he was killed and all his followers were dispersed or disappeared.

After him, Judas the Galilean appeared at the time of the census and persuaded many people to follow him.

But he too perished and his whole following was scattered.

So, in this present case,

I advise you to have nothing to do with these men.

If their project or activity is of human origin,

it will destroy itself.

If, on the other hand, it is from God, you will not be able to destroy it and you may indeed find yourselves fighting against God.”

The Council let themselves be persuaded.

They called in the apostles and had them whipped,

and ordered them not to speak again of Jesus Saviour.

Then they set them free.

The apostles went out from the Council rejoicing that they were considered worthy to suffer disgrace for the sake of the Name.

Day after day, both in the Temple and in people’s homes, they continued to teach and to proclaim that Jesus was the Messiah. 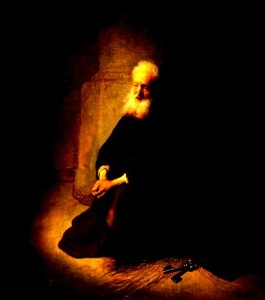